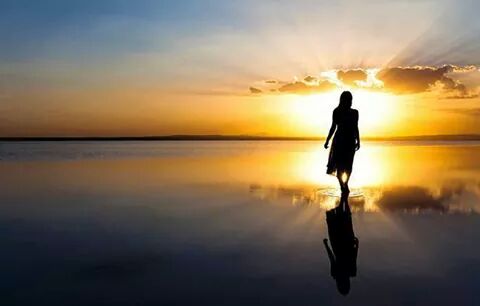 One good thing about believing and having faith in God is the strength and power to hold on to His promises until tey are supplied to You by Him. And despite jeering, persecution and threats,  you still have every reason to keep trusting that He has done it before and He has not and will never change. Doubts and confusions will be erased totally from your mind and all that will be left will be your gaze fixed on Him despite how long it will take.

Faith has a way of transforming our thoughts, mindset and resolutions from negative to positive. JUST ONE BOLD STEP at believing, you will have no choice but to continue believing even if the stakes are higher than before. Because if you take that one step with Him, He will not fail to fulfill His own part.

Abraham chose to believe God and stepped out of his homeland to a place he did not know. The funniest thing is,  he did not know where he was going. He only depended on the direction of God. The message was clear,  “……..leave your country, your people and your father’s household and go to the land I will show you…. ” (Genesis 12:1).

My question here is:  which direction was Abraham suppose to take? I mean,  you can imagine hearing the voice of God like, “Ishe      (replace it with your name

), leave your country, your people and your father’s household and go to the place I will show you”. First of all, I will really have to confirm the voice like: “God, is that really You?”(lol). Then after stepping out, the next question I will ask is:  “God, should I go left,  right or forward?”.

But the scripture did not record Abraham asking any of these questions. Instead of asking these questions, Abraham agreed and believed God when He said, “…I will show you…” And throughout this adventure, God proved Himself faithful by giving him directions on where to go, when to rest and when to continue walking. That is the first step Abraham took in faith.

Throughout this journey, God showed Abraham how faithful He is to His promises. That is why, even though stakes were high,  like sacrificing your one and only son (Genesis 22:2), Abraham did not complained because he knew that God who called him out of his country, people and his father’s household is capable doing the seemingly impossible, like raising Isaac from the dead (Hebrews 11:19).

One question I ask myself is: Why will God still test Abraham despite His walk with him throughout those years? Remember that Abraham never doubted Him. But then,  looking back at the years Abraham walked with God, blessings were higher than the tests he encountered. So the tests had to became higher because God wanted to launch him to a greater level of blessings (Genesis 22:16-18).

Throughout the scriptures, the great men of faith who walked with God experienced this level and it is because of their perseverance, persistence and unwavering trust and believe in God that made their stories to echo to our generation and those coming. God usually place higher tests because He wants to launch us to a higher level of blessings and our stories to echo and serve as encouragement to others passing through the same level.

But one good thing about it all is this:  “God had planned something better for us so that only together with us would they be made perfect” (Hebrews 11:40).

It always gets better with God.