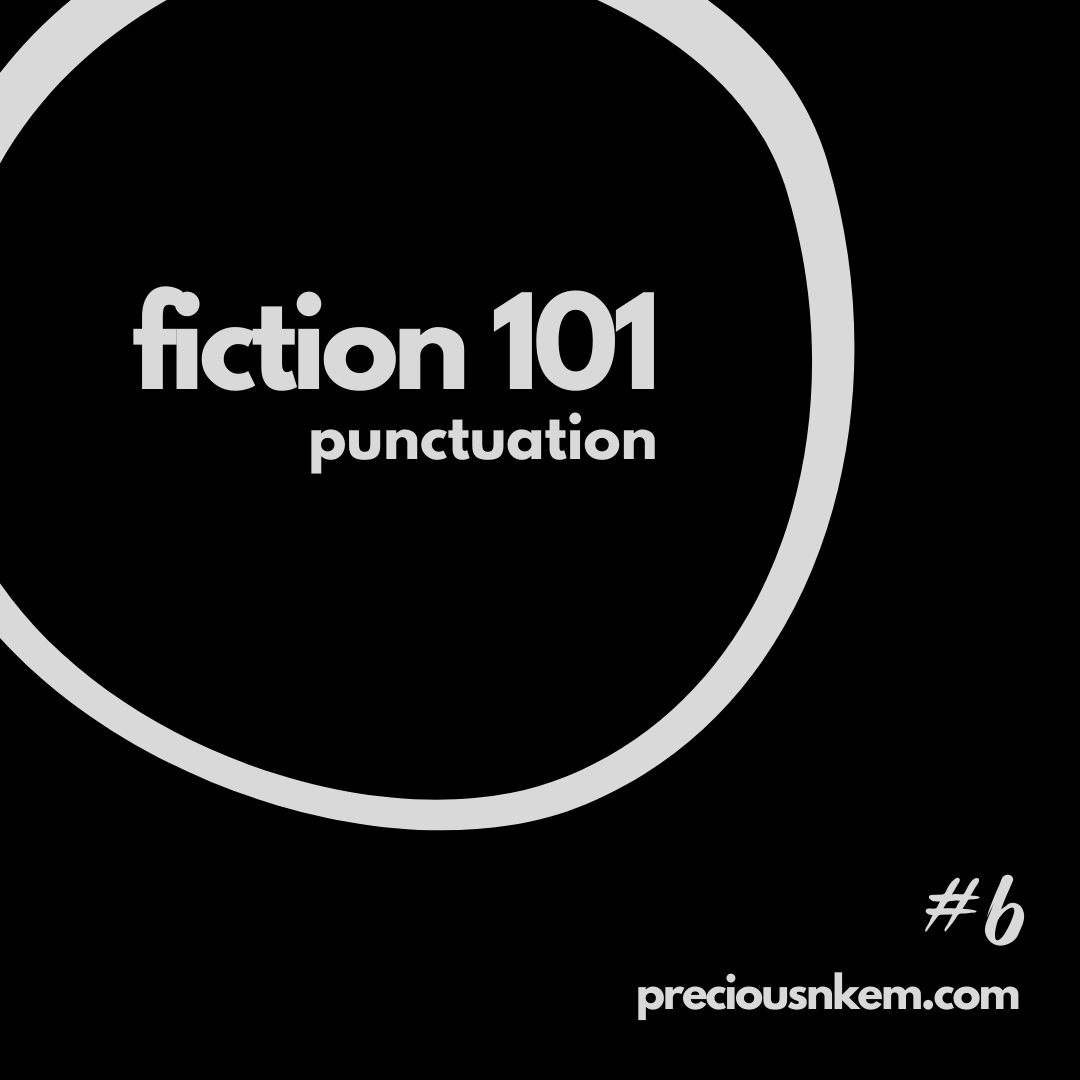 Since Punctuation is a motherload topic, I wouldn’t be giving a full lecture on it, but I will try my best to touch the basics.

Proper punctuation usage is something readers barely notice while reading, and this is because the entire reading process was made smooth. When punctuation marks are wrongly used or omitted, it distracts the reader from the story you are trying to tell. You do not want that. The least you can do is to master the basics, learn the rules, and come about creative ways to bend them.

Think of a slight pause. Have that in mind whenever you are faced with the choice of using a comma in a sentence. Say the sentence out loud if you are not sure a comma should be used. Is there a slight pause? Let’s look at this example from Sarah J. Maas’ Crescent City:

Rolling her eyes, Bryce yanked open the front door, getting a facefull of heat so dry it threatened to suck the life from her.”

Let’s place those commas somewhere else in the sentence and see if it makes sense.

Rolling, her eyes Bryce yanked open the front door getting a facefull of heat, so dry it threatened to suck the life from her.

Yes, you are free to laugh at how stupid that sounds in the head. Those wrongly placed commas made you pause at the wrong spots. In fact, the entire sentence sounded weird.

Let’s totally get rid of the commas and see what happens.

Rolling her eyes Bryce yanked open the front door getting a facefull of heat so dry it threatened to suck the life from her.

The sentence has taken that dreaded run-on sentence problem. Avoid that.

Apart from the pause rule, there are other unbreakable rules of comma usage. When adding an introductory word, phrase or clause to a sentence, introduce a comma.

Slowly, the snake slithered around the corner and vanished into the bushes.

Slowly is an introductory word.

All the while, the snake slithered around the corner and vanished into the bushes.

All the while is an introductory phrase.

Silent as a whisper of silk, the snake slithered around the corner and vanished into the bushes.

Silent as a whisper of silk is an introductory clause.

“I went to the cinema yesterday, that crazy guy was there.”

A comma isn’t strong enough to join those independent clauses. Use a comma and a conjunction (and, but, so, yet e.t.c.), a semicolon or a full stop in cases like this.

“I went to the cinema yesterday, and that crazy guy was there.”

“I went to the cinema yesterday; that crazy guy was there.”

“I went to the cinema yesterday. That crazy guy was there.”

Another point: when you include a name, title, or endearing word when referring to a character in a dialogue, place a comma after such word.

This sub-topic will be too long if I go on and on about all the uses of a comma, so, here is a link to darling grammarly that teaches all the basics.

This is used when writing dialogue in a story, i.e. whenever a character makes a direct statement. Examples:

Gwen frowned and said, “I hate it when you do that.”

Gwen frowned. “I hate it when you do that.”

“I hate it when you do that,” Gwen said.

For God sake, what is that? How can a human being shriek words? Though the usage of shriek looks somewhat creative, it does not make sense in that context. Just go easy on the tags. Readers get so used to said that it becomes invisible after a while. A jarring dialogue tag like moaned, smiled (yes, people actually use smile as a dialogue tag), laughed is a massive no-no. Those tags distract from the dialogue. You can even skip using the said tag (and its reasonable relatives) when it is clear who is speaking.

I’d say this once: stop attaching exclamation marks indiscriminately. Stop it… just stop, okay? Use exclamation marks as sparingly as possible. If you spread it all over your work like some sort of demented fairy, it becomes as though your characters are shouting every word they say. Let’s look at these examples and discuss them:

“Leave me alone!” Gwen yelled as she stumbled away from Mark.

“LEAVE ME ALONE.” Gwen stumbled away from Mark.

All Caps in another way of showing a character shouted their words. There is no need to include an exclamation mark in this case. Please do not overuse the All Caps method.

Do not use more than one exclamation mark. Those examples are very wrong usage of the punctuation mark. One is always enough. Do not give in to the temptation of adding a second or a third.

While there are other uses of ellipsis in formal/nonfiction writing, I will be focusing on its use in fiction. Ellipsis in dialogue/narration indicates the speaker’s soft pause while talking, a change of mood because he got distracted, or his words/thoughts trailing off. It is best used when the change is something slow or gradual, nothing sudden or scary.

Here is an example of its use:

In the above example, the ellipsis indicated a fading of Bunmi’s words.

Side lesson: the italicization of swung that way is a method used to show the speaker emphasis on the words.

There are other examples of the usage of ellipsis. You can check this site out to learn more.

Remember: ellipsis comprises three dots. ONLY THREE. Anything more than that is definitely not a punctuation mark.

There is the hyphen, en-dash and em-dash. I’d focus on Em-dash cause it’s what I use the most in my fiction writing, if you want to learn more about the rest, visit this site.

So, Em-dash. A sudden interruption in sentence/dialogue. It shows how the suddenness of an occurrence can cut short dialogue or narration, and it also helps to build tension. Examples from Stephen King’s Desperation:

“One of em might have remembered a vent or a chimney—”

Here, Audrey interrupted what another character was saying hence the Em-dash.

He couldn’t even remember the name of the geologist woman’s horse, the mare with the strained legs—

Here the narration was interrupted by the character’s words.

Semicolons separate two independent clauses that are related in some way. Understand that the clauses must be independent—that they can stand on their own and still make sense. Semicolons are also used to make otherwise complex looking sentences containing lists/series more cohesive. Let’s jump straight into examples:

This is obviously not a punctuation but I figured I could cram it in here for the sake of it.

First, let’s get one fact straight: NO ONE, NOT IN THE ENTIRE UNIVERSE, ENJOYS READING GIANT BLOCKS OF SENTENCES.

Paragraph your work, please. There is a need for a mental pause while reading. Yes, this is really a thing. Giant blocks of sentences naturally look daunting. It doesn’t matter how sweet your story is, fat paragraphs will make your readers weary. When your narration and dialogues are tastefully paragraphed, it gives your work a fresh and inviting appearance.

When the focus shifts: new paragraph. Think of it like a movie. When the camera shifts to something/someone else, new paragraph. New subject in the narration? New paragraph. Somebody else is talking? New dialogue line. Do not worry about the paragraph being too short. A paragraph can consist of one word. The world will not end if this happens. Variety is the spice of life. Switch it up now and then. Yeah?

We’ve Come to the End

All you learned from Fiction 101 would be a giant pile of crap if you do not overcome being self-conscious of your writing. Maybe you have read and re-read the final product of your “class activity” and believe it’s utter crap. I understand. The boldness to post whatever you write for the public to see can be a tough mountain to scale.

Nobody is telling you to pick fiction writing as a career choice. I have a regular job but I write on the side and I tell you, writing fiction makes you smarter. Tasking your mind to weave a story is not for dumb people. So, take the next brave step and share what you’ve written (your class activity piece). If you are too shy to post it on social media, you can send what you’ve written to my email: contact@preciousnkem.com. I promise to give my candid opinion and extra pointers.

I plan to have a FICTION 102 class sometime in the future. Until next time.